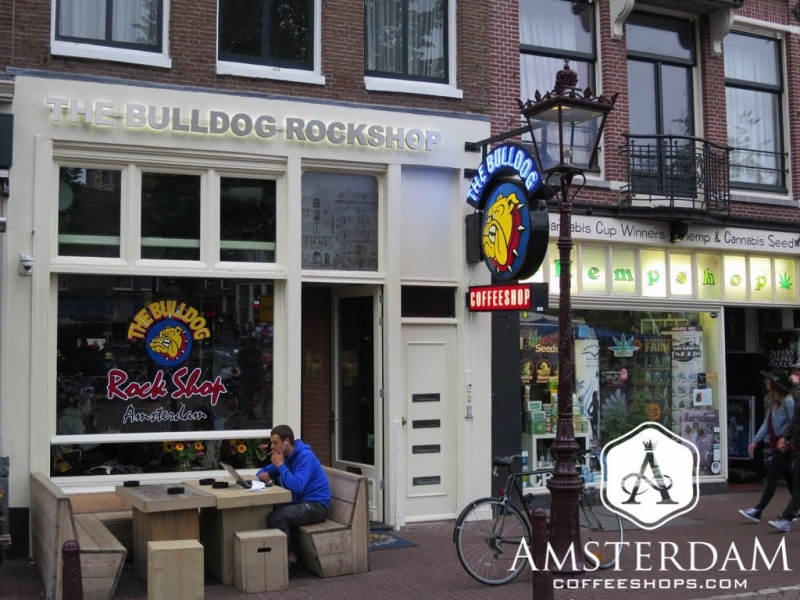 Bulldog Rock Shop coffeeshop is located beside the Singel canal, just around the corner from Centraal Station. This shop rests at the very northeast corner of the Grachtengordel, which translates in English to “the Canal District”. This is an area of historic interlocking canals within the center of Amsterdam, lined by many 17th century canal homes. The district is on the UNESCO World Heritage list, and is one of the most picturesque and popular parts of the city.  The Rockshop is run by the famous Bulldog brand, and as such is one of the more maintained and polished establishments in the city.

As its name suggests, the Bulldog Rock Shop is a themed coffeeshop. It pays tribute to 1970’s era rock ‘n’ roll music.Visitors will find music memorabilia from this era including framed guitars, gold records, and an endless collection of photographs throughout. The décor is upscale and comfortable. Thick dark wooden counters and tables are complimented by plush stools and soft comfortable leather benches. The benches are covered in Bulldog’s distinct dark (brown and white) cowhide pattern, which adds an unusual but nice touch to the place.

The inside has the feel of a trendy city bar, not your traditional Dutch weed shop. Of note, there is also some minimalistic bench seating outside, perfect for relaxing in front of the canal on a sunny day. Though 70’s theme in theory, in practice this shop has evolved a bit over the years to include a wider scope of music (and audience). You are just as likely to find modern rock music playing on the radio as you are something from the classic era of rock ‘n’ roll. Likewise, not all of the celebrities featured on The Bulldog Rock Shop’s walls are at retirement age just yet. Some are distinctly young. No matter, the cool rock ‘n’ roll vibe of this place endures.

The cannabis menu at the Bulldog Rock Shop is consistent with other Bulldog locations. On the weed-side, expect to find roughly a dozen items. These are made up of mainly old-school Amsterdam genetics, which may include some long recognized strains such as White Widow and Super Silver Haze. For hashish, they favor traditional pressed imports from Morocco and other common source regions. They also stock a selection of pre-rolled joints, with both pure and mixed (with tobacco) varieties. 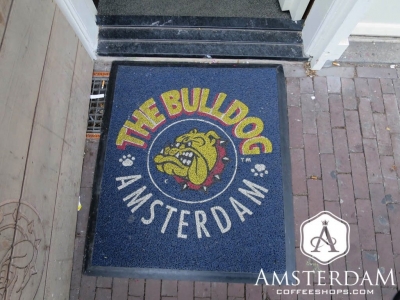 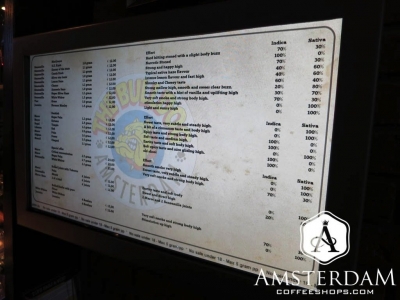 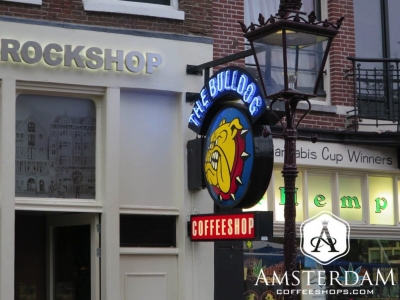 It,s not just Another coffeeshop!

I was there for about 2 days ago and had a night full of fun. What made it to What it was was the atmosphere, the music, the calmness and Cozyness of the shop. As well as the very warming staff there. Martin on the desk was the most Welcoming host I’ve ever met during My stay in Amsterdam. Thank you for taking Good care of me and My friends.

The Rock Shop is a rock ‘n’ roll themed coffeeshop. It is managed by the Bulldog brand, which has the largest chain of coffeeshops in Amsterdam. The Rock Shop has an upscale and well maintained interior. Combine this with cool music and a chill atmosphere, and you have a highly recommended shop for those visiting the area.